Help Humans and elephants Co-exist in harmony in Laos

MAKE A DONATION FOR GIVING TUESDAY
Did you know that the Asian elephant is found in 13 countries? Its population is estimated to be between 45,671-49,028 individuals, down by 50% or more over the past century.  This charismatic species is classified as endangered, and one of its biggest threats is human-elephant conflict.

Human-elephant conflict occurs when elephant habitat is reduced, and elephants venture outside of the forest searching for food on farmers’ land. These situations can pose a risk to people who get in the way of the elephants’ search for food, as well as to elephants who might face retaliatory killing after they destroy farmers’ crops.

- Train “Community Rangers” how to push wild elephants back to the forest safely, monitor crop damage, and mitigate retribution towards wildlife by farmers

- Teach an “Integrated Farming System” approach, where unpalatable crops are planted alongside palatable ones in fields frequently raided by elephants as a deterrent

- Promote community mapping and history recording in order to understand the scope and location of the problem and come up with well-informed solutions.

We need to raise 10,000 USD in order to implement this training in Laos - can you help us reach our goal this Giving Tuesday?

Make a Donation for Giving Tuesday 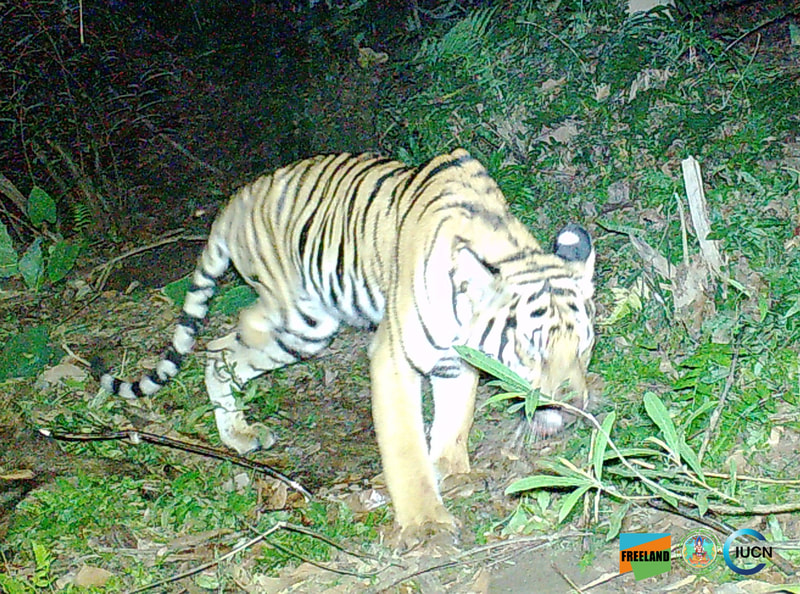 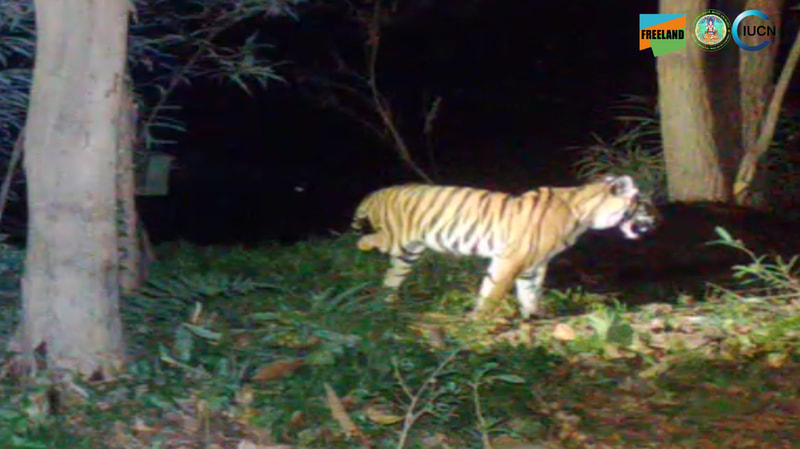 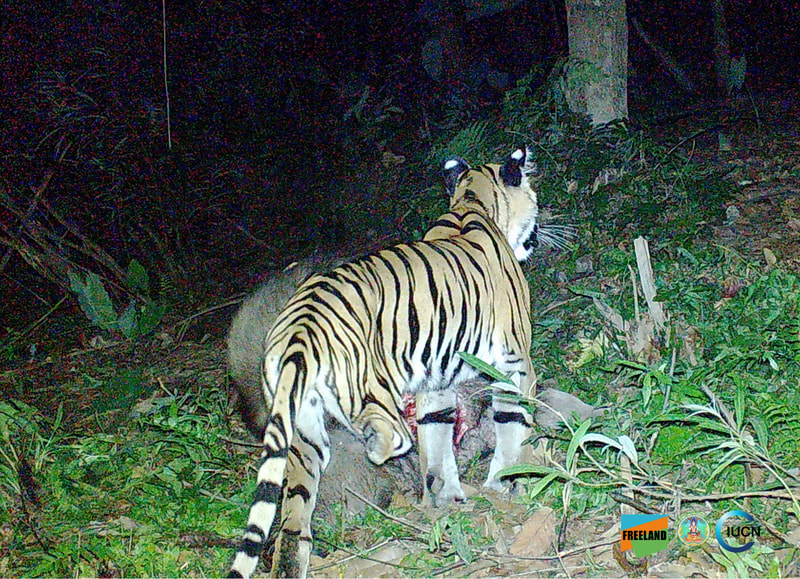 February 9, 2022 (Bangkok) -- A 3-legged Indochinese tiger roaming the forests of Thailand was photographed this week on a hidden camera set by Freeland and IUCN , providing more clues about why the big cats and local people have clashed lately, while pointing to a solution.

The tiger was video-taped feeding on a domestic buffalo that belonged to local farmers.  This happened just days after a local villager was attacked by a tiger inside the park, and only 10 days after 2 other tigers were found poached in the same area with their skins and bones prepared for sale. Those poachers were caught and claimed to have killed the wild big cats after they ate their cattle, which villagers illegally release to roam and graze inside the nature reserve.  Normally tigers will feed on deer, wild boar and other animals, but as these species have declined to lower numbers it makes the incursions of domesticated animals into their forest homes too tempting for the tigers, especially a wounded hungry one, to pass up.

Freeland, IUCN, in conjunction with custodians of Thai Department of National Parks, Wildlife and Plant Conservation (DNP) - and other organizations have joined forces to prevent any further killing of tigers, and to help locals graze their domestic animals outside of protected wildlife areas.  The 3-legged tiger, suspected of being a survivor of an attempted poaching incident has been nicknamed “I-Douan”.  Freeland is now working with authorities to try to get her relocated to a rescue center where she may live in safety with adequate food and security.

This process is not easy as the area is very remote and requires a long 4WD and boat to reach. The Director of DNP for this area Mr. Niphon Chamnongsirisak said 'the only way to prevent further accidents to both people and tigers is by restricting all access to this area and moving this injured tiger'.  Freeland concurs and CEO Pol. Maj. General Petcharat Sangchai stated  "We sincerely hope the tiger can be successfully rescued and moved to the safety of a rescue center."

With less than 200 Indochinese tigers remaining in the wild, Thailand is making extra efforts to ensure the future of this endangered species, which is also the symbol of this year's Chinese calendar.  Tigers require large pristine areas with abundant wild prey in order to establish territories and breed. Conflicts will occur if the sanctity of the tigers habitat is not respected as humans intrude.
Read the Press Release
The hidden tale of a 3-legged tiger
Read the story
Donate